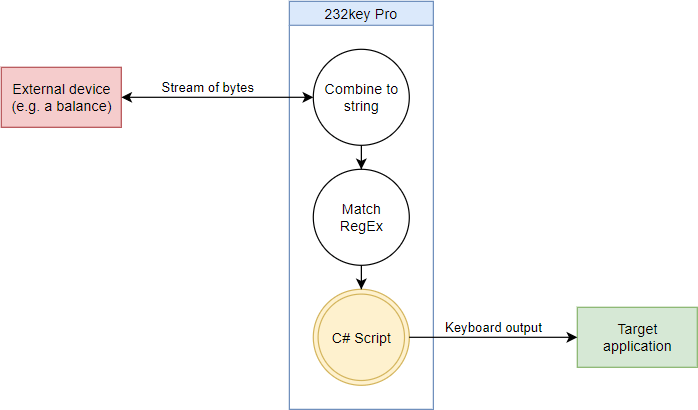 232key Pro works with data strings or “lines of data”. A line is created every time the Terminator character is found in the stream of bytes received from your device (or when no additional bytes have been received for the duration of the Timeout, if set).

Next, 232key Pro attempts to match a regular expression (regex) in each line. The results of this match are made available to your C# script in the variables described below.

Your script runs every time a match is found. It can transform this data in any way you want using the C# language. At he end of your script, return a string that 232key should type, e.g:

This is the default script in 232keyPro. It simply takes the value variable (see below) and adds a new line character (which will be transformed into the ENTER key).


Note: The Encoding set under Settings > General Settings is used when the bytes received from your device are first converted to a string.

Tip: You can use the C# String.Trim method to trim extra white spaces captured by the regex. Example:

Tip: If you’d rather parse all data in your script instead of dealing with regular expressions, you can set the Device in the Input tab to “Generic text device“. This will use a regex which matches all characters except for line feed and carriage return. If you want those as well, change the regex to “([\s\S]+)” (without the quotation marks). All data sent from the connected device will then be available in the value string.

Using the ([\s\S]+) regex, the same input as in the example above would look like this in the Event Log, showing that all data sent by the scale has been matched:

Other than using regular C# code, you can call the following functions from your script to simplify common tasks.


NumberFormatter.Format – formats a string as a number

This function trims white spaces and removes leading zeros. The decimal separator can be set to a dot or comma.

Formats captured data as number with a comma as the decimal separator and returns it to 232key Pro for output.

For your convenience, the following constants are available to your script:

You can define any variable you want in your script*, but the variable will be re-initialized every time the script runs, which is every time a line of data is processed. There’s currently no way to avoid if we also want to use extremely fast compiled scripts.

To maintain state between script executions, the following arrays with 10 elements are available:

The variables are maintained even when the script is stopped and restarted. However, they are lost when the program is closed.

Note: The dollar sign ($) is not typed, it means that the string literal following it may contain {interpolated expressions}. Instead, you could also write:

Example output from a weighing scale:

Tip: Wondering where the blank spaces in the output are coming from? Except for the one we’ve explicitly added, they were already present in the value variable as the regex defined for this device had captured them.

Adding the date and time

You can easily add the current date and time using DateTime.Now.ToString(). A comprehensive list of format specifiers can be found here.

Types the current date (+TAB) and the current time (+TAB) ahead of the content of the value variable and then presses the ENTER key.

Note: The string is broken up into two lines for readability. You could also write the expression in one line:

Example output from a weighing scale

There are currently two ways to add characters which 232key Pro will then convert to keyboard events.

A keyboard event is created for each character in the string returned from your script. The Unicode flag is set for all characters with the exception of tab (\t) and line feed (\n, translated to the ENTER key), which means that you don’t have to worry about keyboard layouts and modifiers.

Types “中間值: ” (average) in front of the content of the value variable and then presses the ENTER key.

Example output from a weighing scale

To type non-alphanumeric keys and key combinations, set the Output Method in the Settings tab to GIDEI and use one of the GIDEI escape sequences described below.

Note: Outside of GIDEI escape sequences, all characters are supported just like in the default output mode!

Detailed information on GIDEI (also implemented as Windows SerialKeys up to XP) can be found in this document.

GIDEI support in 232key is currently incomplete and has to be considered experimental.

Start the escape sequence with the ESC character (ASCII 27), followed by one key name and a period (ASCII 46). White spaces are optional:
ESC Keyname .

Presses the DEL key ahead of the content of the value variable, then TAB twice and finally ENTER. Each GIDEI escape sequence is shown in a different color.

Presses Ctrl + F and then types the content of the value variable.